This year is so awesome...

Man, this is the year of fighting games. Just wanted to know if you are loving BlazBlue as much as I am, and what your thoughts on KOF XII are.

A Fair Review of King of Fighters XII. . .

Hi, been browsing your site for awhile! I just wanted to tell you that I've found TFG to be the only site that gave (what I would consider anyway) a fair review of King of Fighters XII.

I'm a huge SNK fanboy, true and through, and as a fan I can say I wasn't exactly too "Wowed" by XII but given this is a reboot with new gameplay elements that rival Street Fighter IV in a few ways, I can't say I'm disappointed. So far it seems a lot of us KoF Vets are divided over the game. While I enjoy the new aspects of the game, my friend felt it was rushed.

Then again, I've always judged KoF games on three basic principals:
*How cool of a match can you pull off with Andy and Terry fighting each other?
*Did they all sound right? Like they should?
*Was the game balanced enough that no one move could destroy you?

XII meet my standards (though the "Engrish" does get old fast >.<) but this is the first KoF game I've played that felt truly balanced. Not like say, Samurai Showdown II balanced, but it was there.

So anyway, I'm downloading the patch for the PS3. Really hoping they fix up the lag issue and I'd like to take you on sometime man. I've also got BlazBlue, Street Fighter IV, Mortal Kombat 2, and I'll be grabbing MvC2 next week as well!

I warn ya though, I play a mean Robert and Kim.

How come yor site doesn't even bother mentioning fighting games based off of animes or mangas, like the Dragon Ball Z Budokai series or even the Super Smash Bros series? Some of those were pretty good and I feel the deserve to at least hava review on your site.

Thank you for your time.

Hi, nice pics in the showroom gallery. I was wondering if you would consider hosting other peoples collections on the site, granted they are worthy of course. ^_^ It's hard to find good fighting game figure enthusiasts and I'd love the chance to have some of my shelves shown on your site. Sorry if I'm out of line, just thought I'd try sharing. Keep up the good work on the site, thanks!

Some of my shelves, things are constantly getting switched around though. I attempted to make the entire Neo Geo Battle Coliseum roster via customs, but only made it about 2/3 through. My Mai Shiranui wall....still need to finish up about 5 resin kits of her to add to that, just no time. ^_^ A few single shots of custom Ryo, Neo-Dio, and Mars People.

Sure no problem, and thanks for the compliments! ^_^ All the resin kits I painted myself. If you notice there are some PVC pre-painted statues in there like the Godess Athena and Nakoruru.

Mars People is completely scratch built. I made the head out of this very light weight Crayola clay I found. I normally use sculpty or miliput, but that would have been too heavy for the legs to support. The legs are just electrical wire with the ends dipped in plastidip. I then bent all of them into the pose I wanted and painted it. Aside from the color, the paint also kinda froze them in place to give it even more support. The ray gun was just pieces from other guns I put together, and the eyes are just standard clear half spheres from the craft store.

Neo-Dio was a devil man resin kit. I shaved off the horns and just didn't put the tail or wings on. For the quills/hair I cut out roughly 300 of them from sheets of that foam stuff you get at the craft store. I needed something light weight again due to the mass number needed. I had to glue each one on by hand but I was very pleased with the result.

Marco is a Resaurus Charlie body with a custom head and spare parts like the jetpack, gun, etc.

Tung was a Gen resin kit that I cut the legs down to make him shorter. I shaved the head down and made the bushy eyebrows.

Ryo was a Ryu resin kit, shaved the head and made new hair.

Ai was a Lupin Fujiko kit with a custom head, added accessories like her pocket neo geo and tetris blocks made from wooden blocks.

Washizuka was a Jubei resin kit, just had the head changed a bit, added the headband, removed the eyepatch, etc.

I also did a lot of custom repaints on SOTA figures like Shadow Lady, Shin Akuma and Dark Sakura (cause theirs sucked IMO), and I tackled Cyber Akuma which came out pretty decent I think.

Genjuro I bought from this place, LINK. Be warned though, this site has A LOT of old and cool stuff. I spent over $500 my first visit. Even found some of my own personal "holy grail" items which I was searching years for on here.

I would just like to say thank you very much for choosing my video to be
on the news section, I appreciate it. Great site by the way. I'm
surprised you run it by yourself.

Anyways, I just dropped by to let you know I have a new video out. Don't
know if this satisfies enough to be put up but just letting you know.

I've never felt compelled to send an email like this, but I've never come a cross such a complete and useful online resource for beat em ups, I stumbled upon it by accident and love it! It's going to be my top viewed site soon. Its just so brilliant I cant find words to describe. I actually started browsing on it for 2 weeks and I just love it, I was scared because I forgot to bookmark and accidentally deleted my history. But through sheer determination I found your website again and am over the moon. !! You guys are great!

An Inaccuracy in your Jam Bio. . .

In your Jam Kuradoberi bio, you stated that "She's got the "fighting waitress chick" down pat... And was the first of her kind."  Jam definitely has it down pat, but she wasn't the first.  That honor goes to the girls of the Variable Geo series.  The first game in the series was released in the summer of 1993.  It's about a martial arts tournament to determine Japan's strongest woman. The tournament is sponsored by parodies of various real-life restaurants.  In exchange for sponsorship, the restaurants get promotion by having a tournament entry work as a waitress.  Though it's technically a hentai fighter, it was popular enough to have many sequels and even spawned an anime.  I just want to help you keep your information accurate.  TFG kicks ass!  Keep up the great work.
Oh yeah, here's the wikipedia page for Variable Geo, if you're interested: LINK.
-Rik

Your website is a huge contribution, I always find some characters I
never known in it.

As a fighting game Fan, It was exciting to know KOF will be a movie,
but the trailer let fans down like hell...

I have seen your section of matching celebrities with Characters, it
is much concerned with westerners, though.

So I would like to introduce who Asian (Chinese, in fact) fans prefer
for the KOF movie Cast.

The most of them were chosen for Flamboyant. (like Gackt for Kyo).

But for Iori Yagami, 90% or 95% Chinese choose RoyCheung, a
villian-on-screen Hongkong Actor.

He never (seldomly) play as a decent hero. Most his play are gangsters
or Hero's rivals.

When the KOF were '96 and '97, He came out on a gangster HongKong
movie, sequel 3 of "Young and Dangerous" as Crow,

A nasty villian with the haircut alike Iori, he acted bloodless and
sadist (yet witty), that was too impressive and convinced people  that
he should BE Iori Yagami,

(thought he never flame in the movie).

The Next convincing is the Sequel 4, RoyChueng revived, as another
Villian YuYong(Named as RoyChueung's Chinese name),

this time He plays as a high-class gangster with black suits and white
sleeves, which push him more to Iori Yagami~

(Check Out this shot. LINK) 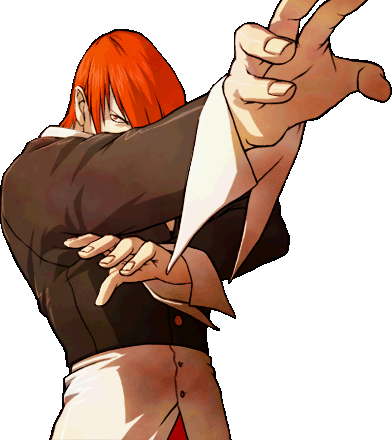